The Los Alamitos Creek Trail is a very popular and often busy scenic multi-use trail through San Jose's upscale Almaden Valley. It begins at Almaden Lake, at the western edge of the Santa Teresa Hills and at the entrance to the Almaden Valley. Almaden Lake is a popular place for swimming in season, boating, picnicking, and fishing. A path leads around the northeast shore of the lake to join the Guadalupe River Trail (see below). Another path crosses over a bridge across Alamitos Creek to the lake's swimming, picnic, and playground areas next to Almaden Expressway.

The trail leaves Almaden Lake at the park's southeast gate. Nearby is an access to Winfield Drive. The entrance to the semi-private Boulder Ridge Golf Course begins here. The trail parallels the landscaped golf course access road, Old Quarry Road, which runs uphill. After the hill, there's a trail access point at the end of Crossview Court near a par course station. The trail then goes underneath the bridge at Mazzone Drive. On the other side of the bridge, it runs next to Crossview Circle. Here the trail is a straight, sunny stretch, next to a wide part of the Alamitos Creek bed that is normally dry. Alamitos Creek is farther to the west and joins a small creek. Sunny section of the trail, with the Alamitos Creek bed to the left and Crossview Circle to the right

After Crossview Circle turns away from the trail, a hill begins on the left. This is part of the golf course property. The trail runs through a shady section, with Alamitos Creek close by: Creek Trail running next to the creek

Along the trail, there are more par course stations, interpretive signs, benches, and drinking fountains. An equestrian trail parallels the paved multi-use trail. There's a deep hole at some large boulders, called "Elephant Rock." Swimming is not allowed here however. Soon the trail parallels Pfeiffer Ranch Road. The wide dirt equestrian trail runs between the paved trail and the road. The trail runs through a shady grove with picnic tables. After that, it passes by the tot lot at Pfeiffer Park. It turns and crosses a bridge over the creek.

At the upstream side of the bridge is a deep pool often teeming with large fish (not gamefish, unfortunately). Here it comes to a staging area, with benches and a large dirt parking lot off Camden Avenue. The equestrian trail drops down by the creek.  The paved trail follows Camden Avenue on the west bank of Alamitos Creek. It crosses Graystone Lane, one of the few street crossings. Watch for traffic as you cross to the trail on the other side. Sandstone was quarried in the steep Santa Teresa Hills near here. Stone from here was used to build Stanford University and buildings in downtown San Jose. If you go up Graystone Lane a little, you'll see a small historic stone building, built in the 1870's, which housed tools for the quarry. Graystone Lane Bridge over Alamitos Creek. The Pfeiffer Stone House is ahead.

The paved trail runs above Camden Avenue, while the equestrian trail continues through a heavily-wooded area next to the creek. The trails pass Greystone Park and Leland High School. Alamitos Creek, with houses and ranches on the other side Wildflowers along the Los Alamitos Creek Trail, Camden Avenue to the right

The paved trail then rises up a bit and levels off. Soon it reaches a fork where a  wide dirt trail begins. This is the undeveloped Singer Park area. The paved trail drops down and continues through an old orchard by Camden Avenue. The dirt trail runs on a levee above Alamitos Creek: 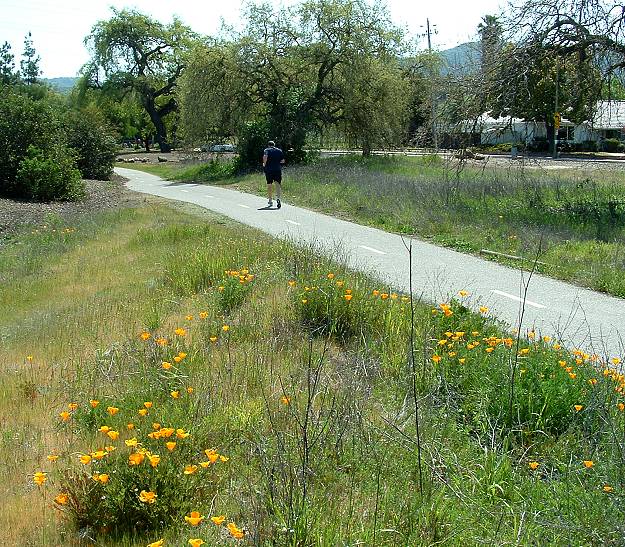 View of the lower trail near Carrabelle Park 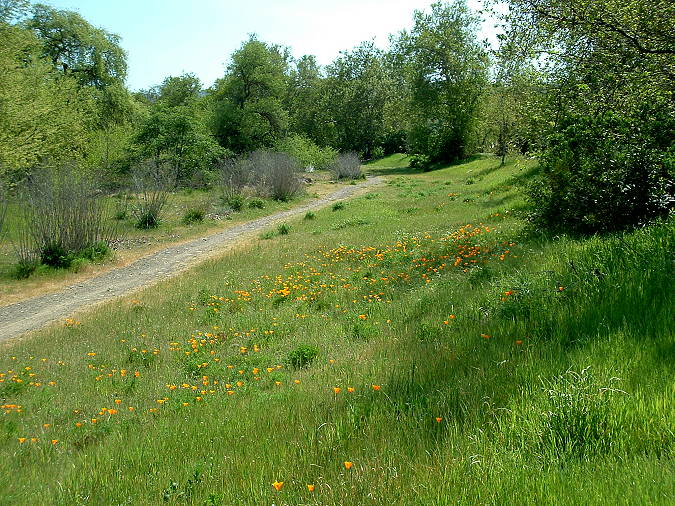 Poppies along the dirt path below the paved path

This is a shady, scenic path with easy access to the adjacent suburbs. This is a popular area for dog-walking. The trail parallels Queenswood Way, then runs under the Almaden Expressway bridge. It contiues on next to Portwood Circle and ends at McKean Road near the Harry Road intersection, 3.6 miles from the start of the trail at the Almaden Lake southeast gate. End of the trail on the west bank, at McKean Road

You can cross over the creek at the McKean Road bridge and come back along the east bank. The trail on the east bank is similar to the one on the west bank, with a dirt trail closer to the creek. The trail parallels McKean Court, goes under Almaden Expressway, and parallels Royalwood way. 
The east side of the Los Alamitos Creek Trail ends at the Camden Avenue Bridge, about 4.5 miles from the start of the trail.

The Calero Creek Trail begins across Camden Avenue. It is a long, mostly straight, paved trail that runs between Calero Creek and Camden Avenue, with a wide dirt corridor between the trail and the road. Boulders in this corridor discourage off-road vehicles. The view of the creek is mostly blocked by heavy vegetation. While the trail is sunny in the afternoon, bushes and trees grow very close to the trail, and tunnels are cut underneath them. You may have to duck occasionally.  The paved Calero Creek trail ends at Harry Road, 0.6 miles from the end of the Los Alamitos Creek Trail. If you cross over Calero Creek at the Harry Road Bridge, you'll see a narrow dirt path on the east side of the creek: This path follows the creek next to the fence that marks IBM's Almaden Research Center's property. It is a shady route, with dense vegetation on the creekside and occasional views of the creek. On leftside is an old orchard on IBM property. The trail turns to the left at the end of this orchard. On the right side is a big open field. The trail dips down and crosses Santa Teresa Creek on a concrete crossing. Fortunately, it usually dry. It then turns right and follows along a wide service road, which runs between the base of the hills and a field. After the road reaches a fenced-off facility, the trail turns into a narrow and often bumpy dirt path. It eventually pops out through a stile at San Vicente Avenue. You have traveled about 1 mile from the start of the trail at Harry Road. Just ahead, near the Fortini Road intersection, you'll see a parking lot at the entrance to Santa Teresa Park's Stile Ranch Trail. This trail zigzags up the steep rocky hill on switchbacks. It is one of the more spectacular trails in the park, and is lined with poppies in the spring. The entrance to the Fortini Trail is also here, heading south along the base of the hillside. This trail also leads into Santa Teresa Park and is a much easier trail than the Stile Ranch. 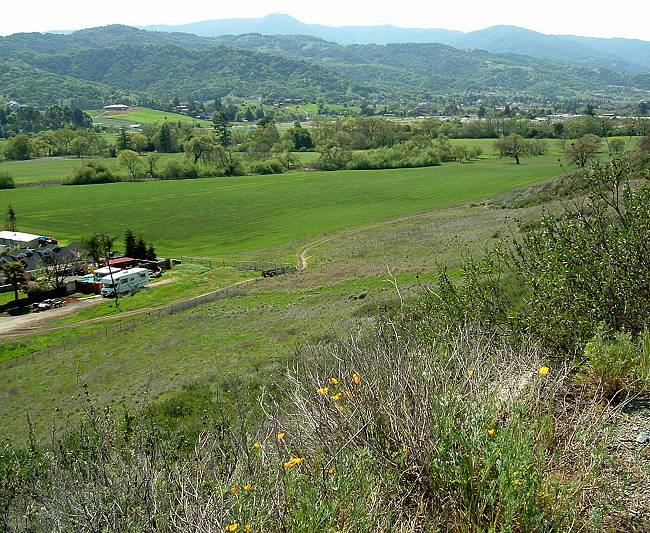 Back at the end of the Los Alamitos Creek Trail at McKean Road, instead of backtracking on the east side of the creek. you can take McKean Road east to Harry Road to reach the Calero Creek Trail. You can then backtrack along the trail to Lake Almaden. Alternatively, you can head back along Almaden Expressway if you're in a hurry and don't mind being next to a busy expressway. If you go southwest on McKean Road, cross Almaden Road, and continue up on Mockingbird Hill Lane, you'll end up at the Mockingbird entrance to Almaden Quicksilver County Park. Here, you can access the New Almaden, Hacienda, and Virl Norton Trails. The latter is part of the Bay Area Ridge Trail and leads through the park to the Wood Road Trail at Hicks Road. If you take narrow Almaden Road south, you'll follow the course of Alamitos creek towards its source at Almaden Reservoir. On the way, you can pass through the historic town of New Almaden and past the southern entrance to Almaden Quicksilver Park. You can bike through the park along the Mine Hill Trail. Past the park entrance, the road crosses Alamitos Creek and becomes Alamitos Road. It skirts the north shore of Almaden Reservoir, then intersects the start of Hicks Road. Hicks Road is a steep, winding, narrow road that climbs over the mountains. Near its summit is the entrance to the Wood Road trailhead of the Sierra Azul Open Space Preserve to the west and the HIcks/Wood Road staging area to Almaden Quicksilver on the east.  After that, Hicks Road drops down steeply along the west side of Almaden Quicksilver Park and Guadalupe Reservoir and ends at Camden Avenue. 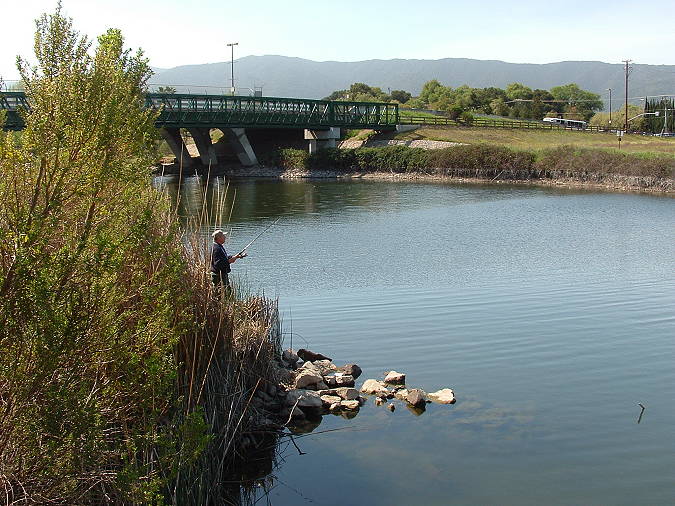 Fishing by the pedestrian bridge next to the Coleman Road bridge

The Guadalupe River Trail begins here, where the Alamitos Creek Trail ends. It passes the Almaden Light Rail station, which a large parking lot and a trail access gate. The trail passes by a dam with a fish ladder. Across the river is the headquarters of the Santa Clara Valley Water District, which has trails and fishable ponds. The trail goes under the Blossom Hill Road bridge, with access ramps to the road. It continues straight along the creek until it reaches a large percolation pond. The paved trail turns right to follow along the east bank of the pond, while a wide dirt road continues to follow the creek on the west bank of the pond. Dedication of this section of the Guadalupe River Trail, 2/28/04, with Councilwoman Pat Dando (left) and Water Board Commissioner Rosemarie Kamei (center)

The paved trail goes under the Hwy 85 causeway. It reaches tiny Cilker Park, which has benches and a drinking fountain: 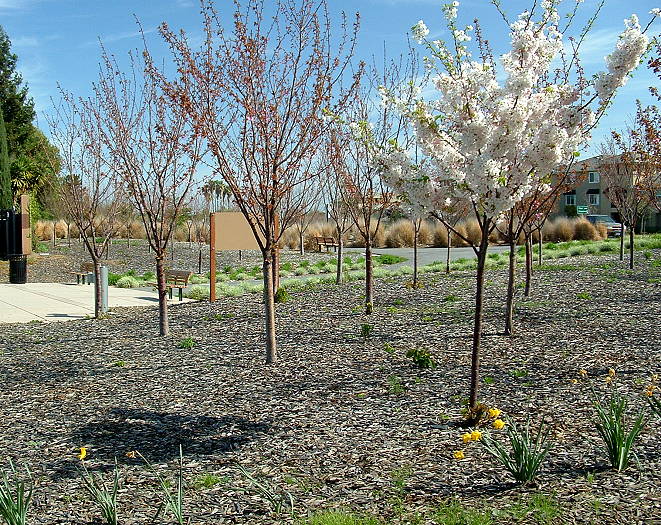 The trail runs a little farther and currently ends at Chynoweth Avenue, but there are plans to extend it. From the Coleman Avenue Bridge at Almaden Lake, the trail is 1.4 miles to its end at Chynoweth. If you started at the Guadalupe River Trailhead at Chynoweth and follow the route above, it is 8.4 miles to the Stile Ranch/Fortini Trailhead at Santa Teresa Park. 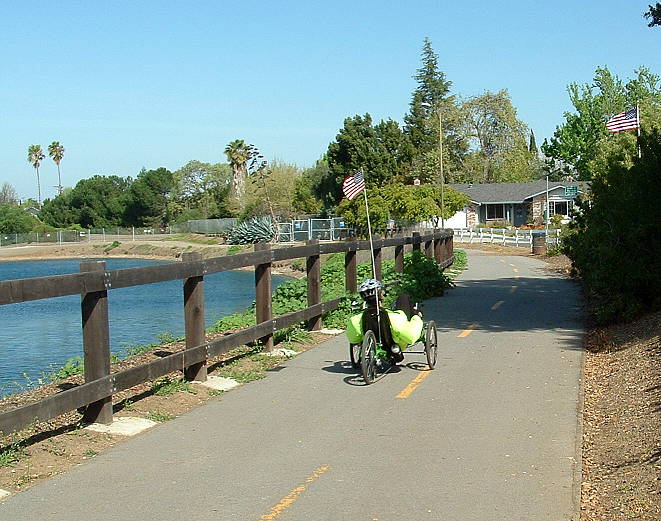 End of the Guadalupe River Trail at Chynoweth

The following shows the mileage readings, starting at the Guadalupe River Trail entrance at Chynoweth, following the main trail through Almaden Lake Park, the Alamitos Creek Trail to McKean and back to Camden, the paved Calero Creek Trail, the dirt Calero Creek Trail, ending at the Stile Ranch Trailhead at Santa Teresa Park. The GPS coordinates are shown. The table lists the minutes for the given degrees. The mileage and GPS coordinates were taken from a GPS receiver.